Ukrainian World Congress (UWC) President Eugene Czolij held a series of meetings in Berlin, specifically with Members of the Bundestag (German Parliament) and other high-ranking German officials to whom he appealed for continued support for Ukraine in de 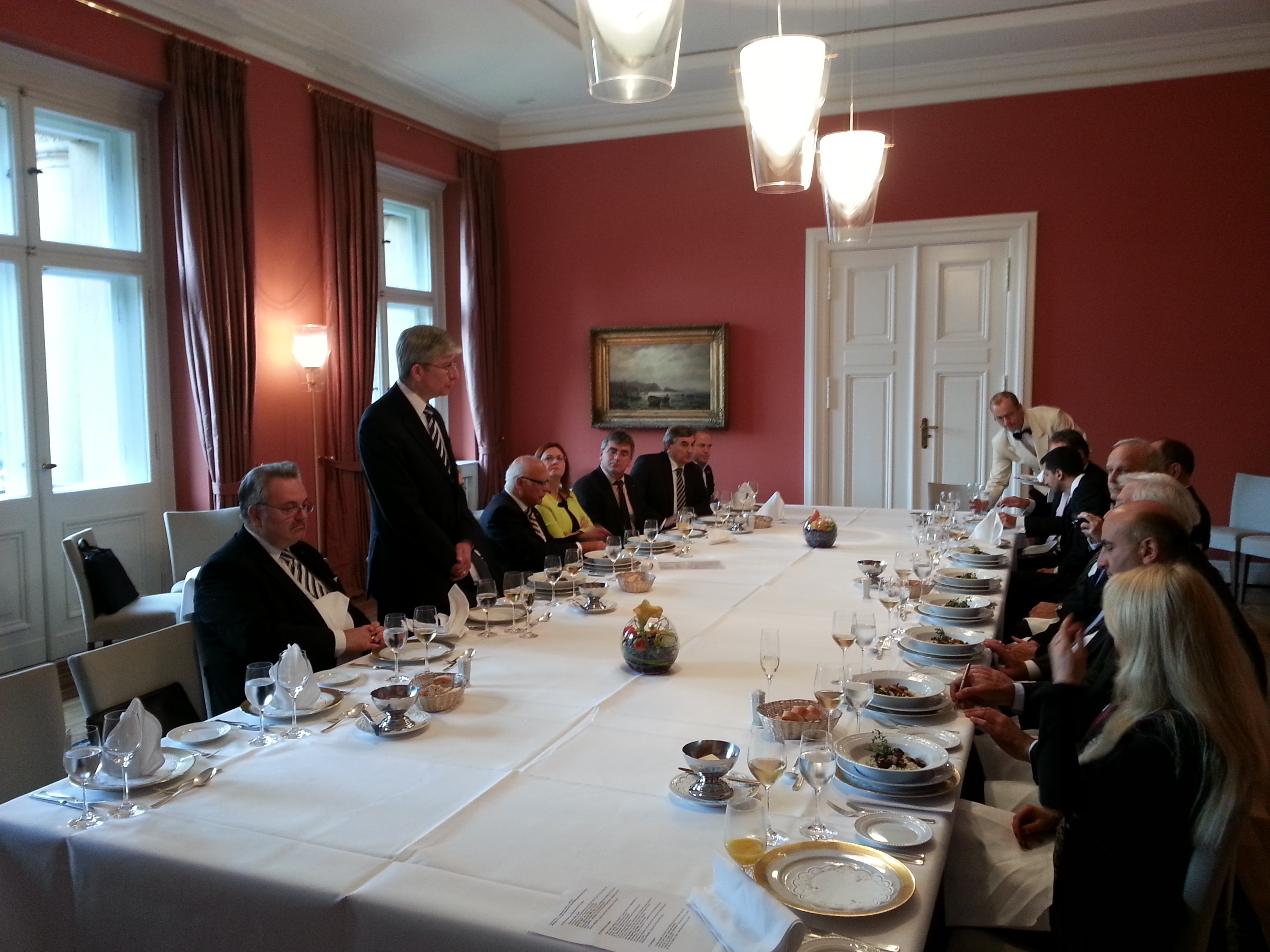 Е. Чолій виголошує слово під час обіду в приміщенні німецького парламетського товариства у Бундестазі.
E. Czolij speaking at a lunch on the premises of the German Parliamentary Society in the Bundestag 14 September 2014MEDIA RELEASE
Ukrainian World Congress President Eugene Czolij
discusses support for Ukraine during Berlin visit
10-14 September 2014 Ukrainian World Congress (UWC) President Eugene Czolij held a series of meetings in Berlin, specifically with Members of the Bundestag (German Parliament) and other high-ranking German officials to whom he appealed for continued support for Ukraine in defense of its independence and sovereignty.
On 10 September 2014 the UWC President addressed German polititians, businessmen and representatives of civil society organized in the Bundestag by the German-Ukrainian Society for Policy, Economy and Sciences.
On 11 September 2014, on the occasion of the UWC President's visit, a lunch was held on the premises of the German Parliamentary Society in the Bundestag with Members of the Bundestag representing three political parties and other distinguished guests. During the lunch Eugene Czolij spoke about the military aggression against Ukraine by the Russian Federation which he described as an international crisis with its epicentre in Ukraine.
On 12 September 2014 on the invitation of The German Marshall Fund of the United States the UWC President spoke at a roundtable discussion on the topic Euroatlantic integration of Ukraine.
During his addresses and individual meetings the UWC President emphasized that today's brazen invasion of Ukraine by the Russian Federation violates the principles of international order and threatens European and global security. Expressing gratitude for supporting Ukraine, the UWC President called upon Germany to continue standing firmly on the position that Russia's imperialist ambitions must be stopped and to help put an end to the occupation of Ukraine by Russian armed forces and terrorists, particularly by providing Ukraine with the necessary military-technical assistance, politically isolating President Vladimir Putin's regime and imposing harsher targeted economic sanctions against this regime.
Participants of the meetings demonstrated their understanding of Ukraine's needs and the importance of promptly finding ways to stop the military actions of the Russian Federation in Ukraine.
In addition to Members of the Bundestag, participants of the meetings included other German high-ranking officials, foreign diplomats, business people, Ukraine analysts and representatives of non-governmental organizations.
The UWC President's agenda in Berlin also included a meeting with the leadership of the UWC's Ukrainian national central representation, the Association of Ukrainian Organizations in Germany, and its President Roman Rokytskyy, and other community meetings.
Accompanying the UWC President in the meetings was Ukrainian community activist and specialist in German-Ukrainian relations professor Nicolas Szafowal, who also helped in the organization of these meetings.
"While in Berlin I had open and constructive dialogue with high-ranking German officials who underscored their solidarity with Ukraine and the need for joint, concrete actions by the international community in defense of the territorial integrity of Ukraine," stated UWC President Eugene Czolij.
The UWC President met with the following high-ranking German officials:
Beck Marieluise, Member of the Bundestag, member of the Parliamentary Committee on Foreign AffairsBertele Joachim, Head of Division for Central, Southeastern and Eastern Europe, Southern Caucasus and Central Asia at the Federal Chancellery
Brandl Reinhard, Member of the Bundestag, Vice-Chairman of the Parliamentarian Committee for National Security and Foreign Policy;Doss Hansjurgen, Professor, former Member of the Bundestag, President of the German-Ukrainian Society for Policy, Economy and Sciences
Holmeier Karl, Member of the Bundestag
MacKerron Heike, Director of The German Marshall Fund of the United States, Berlin Office
Meier-Klodt Cord, Ambassador, Special Envoy for Eastern Europe, Caucasus and Central Asia at the Federal Foreign OfficeMetzler Jan, Member of the Bundestag
Petry Christian, Member of the Bundestag
Röring Johannes, Member of the Bundestag, Member of the Parliamentary Committee for Economic Cooperation and DevelopmentSchattschneider Dirk, Minister-Counsellor for Southeast and East Europe, South Caucasus and the Federal Ministry of Economic Cooperation and DevelopmentSpary Peter, Secretary General of the German-Ukrainian Society for Policy, Economy and Sciences
Stefinger Wolfgang, Member of the Bundestag
Wellmann Karl-Georg, Member of the Bundestag, Vice-Chairman of the Parliamentary Committee of Foreign Affairs, Member of the Parliamentary Committee for the European Union. The UWC is the international coordinating body for Ukrainian communities in the diaspora representing the interests of over 20 million Ukrainians. The UWC has member organizations in 33 countries and ties with Ukrainians in 14 additional countries. Founded in 1967, the UWC was recognized in 2003 by the United Nations Economic and Social Council as a non-governmental organization (NGO) with special consultative status.